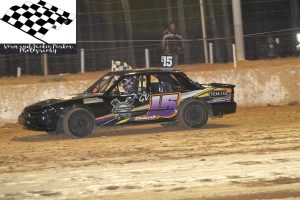 Rushworth Speedway action on Saturday night provided a great nights entertainment with Sedans, Big V8’s and little pocket rockets on the most important club night of the season with Adam Box victorious in the Paul Benton Memorial for the first time, Jason Crawford the winner of the Grand Prix Midgets Ironbark Classic and the women putting on a classic race of their own with Belinda Chalcraft taking a feature race win.

The Goulburn Valley Open Saloons and Production Sedans combined to compete for the Paul Benton Memorial victory to honour a former club president of the club and Adam Box made his intentions clear from the start with victory in heat one by a huge margin. Jay Nicolaisen who won the Open Saloons at the last show, served up a win in the second and then completing the big three, Paul Lamb won heat race number three to ensure all the top drivers had one each. 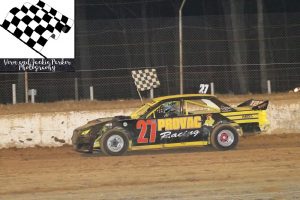 In the fourth qualifier Box set the fastest one lap time of the night for the Saloons with a 19.206 in winning the race, whilst Nicolaisen won the next and Box made it a clean sweep for his qualifying with a win in the sixth. 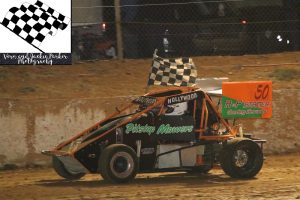 In the ‘Automotive Super Balance’ supported Ironbark Classic for the motorbike engine powered Grand Prix Midgets siqualifying races sorted out the field for what would be an inversion draw final. Janelle Saville the defending champion and Jason Crawford topped the qualifiers after Trevor Perry, Saville, Crawford, Chris Fowler and then Saville and Crawford again won the qualifying races. Perry set the fastest one lap time of 16.455 in the first qualifier with Crawford completing the fastest ten lap race as the winner in race three with a time of 3 minutes 0.280 as the overall time.

Crawford then inverted the field with himself from eighth and Saville in seventh alongside whilst Perry did not start the final due to some engine issues that were not worth the risk in competing. The twenty-lap final began with Katandra’s David Bacon leading early before Mooroopna raised Lisa Chalcraft moved to the lead. Saville moved through the field with Crawford following her and by lap five she was chasing Chalcraft who had a handy lead.

Fowler was the first of the top drivers to pull out of the race then a few laps later, Saville followed. Louis Rodriguez from Kyabram was the next to go and on lap seventeen after a caution light brought the field back together, Crawford rounded up Chalcraft and took the race lead. Crawford went on to win from Chalcraft, rookie Shepparton raised driver Alex Myers, Bacon and Travis Florrimell. 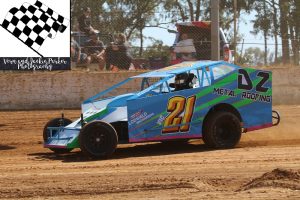 Visiting Dirt Modified action was the second quickest class of the night with Micheal Ardley in their first race clocking a 17.181 lap time on his way to a win. Zeke Edwards then cleaned up from that moment winning the second qualifier, then the third and finally claiming a win in the final ahead of Darryl Hickson, Steve Hopkins, Ardley and Steve Lodwick.

Another Chalcraft, this time Belinda figured in the action in Ladies Saloon competition with her and great mate Felicity Roycroft at each other most of the night. Roycroft won the fastest race of the night in the best conditions winning the first qualifier with a one lap time of 20.642 on the way to a race time of 3 minutes 30.767 as she took victory in the first heat. Chalcraft then won the second and third ahead of Roycroft with Kelly Lamb in third on both occasions. The final race then was a classic between Chalcraft and Roycroft with Lamb right behind both all the while. Roycroft looked for passes through turn three and four right through the race and kept the pressure on at the other end of the track also. 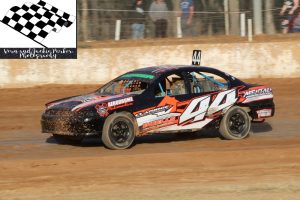 At the end of twelve laps, Chalcraft finished .290 of a second in front of Roycroft, Lamb, Jas Bergman and Rhiannon Alexander.

In Junior Sedan racing Bradin Claridge won all four races going faster in each race through the evening. In the final Claridge timed with 20.543 for a single fastest lap and took the win from Keiden Britton, Connor Claridge, Jordan Simmonds and Liam Tooby.