Drouin Speedway held its last race meeting prior to Christmas on Sunday as Santa Claus made a visitor to warm the hearts of families with children and Santa bringing joy to the kids via lolly packets and victories to Travis Evans in the Wingless Sprints and Jeff Blencowe in the Standard Saloons.

Wingless Sprints were competing in their second round of the West Gippsland Wingless Sprint Series with first round top three Wayne Logue, Brad Foster and Matt Mills returning to try to increase their points haul and cement spots at the top of the table. 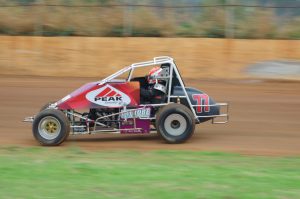 Andy Hibbert then made a return to Drouin Speedway having to travel across from Geelong and he won heat three from Logue and Evans. It all went wrong for Logue though in the fourth heat when he tore the shocker right off the car and did not have the time or equipment needed to fix the damage, Thomas McDonald won the fourth heat from Evans and Mick Lovell, both Evans and Lovell are from the Drouin club.

In the twenty-lap feature race, Evans quickly asserted himself at the front of the field and Hibbert made some great passes to press forward and begin a chase of the leader. A pack of competitors behind where at times competing for third or fourth with Evans picking up the win from Hibbert, McDonald, Foster and Mills completing the top five. 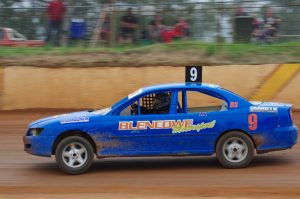 In a new car, Jeff Blencowe and Victor Benson both looked the goods during qualifying racing for the Latrobe Valley Waste Standard Saloon Eliminator Cup and as it turned out, they would be the top two drivers come feature time.

Luke Capek had a great win in the first qualifier of the day in front of Blencowe and Benson with Mark Borkowski winning the second heat ahead of Benson and Johnny Watson. Aaron Laidlaw had a great win in the third heat leading Leigh Gooding the local champion driver of the class for a number of laps before running out winner from Mick Coomer and Capek. In the final heat race, Blencowe picked up a win with Benson and Coomer rounding out the top three.

The Eliminator Cup is a gruelling twenty eight-lap race with eight lap’s one direction, eight the other way and then twelve to close in on the cash up for grabs. A huge crash during the race involving Capek and Coomer put both cars out of the race whilst in third and fourth positions with the Capek driver and passenger both requiring paramedic attention before leaving the venue a little battle scarred.

Blencowe right from the start of this race led with Benson chasing, Gooding was trying to work his way forward and cars started to drop out towards the end of the second section of the race and early in the last and Gooding worked his way to third.  Blencowe won from Benson, Gooding, Kane Gibson and Mark Borkowski who thrilled with his Dukes of Hazard moment flying with wheels off the dirt trying to get back on the track crossing the dogleg circuit.

In Junior Standard Saloon racing, Jack Yeomans enjoyed a great day out defeating his teammate Deegan Benson in all four races, three heats and the feature event. Benson was second in the feature with Owen Cecil in third.

In the Ladies Standard Saloons Allana Ardley and Kate Stuchbery had a great battle for most of the day with Allana winning a heat, Stuchbery winning two before Ardley won the final from Stuchbery, Erin Mitchell and Jemimia Borkowski in the final.

The Vintage Super Modifieds and Classic Sprintcars were entertaining with Rob Watson really working the track in his older model Sprintcar whilst Graeme Briggs and Jamie Angus in their Super Modifieds also showed that their cars still had that something magical about them.