Racing at Drouin Speedway on Sunday seen the Ladies Crash and Bash title qualifying and the Street Stock Rumble run and won on a hectic day with full course speedway racing and racing incident ending the day’s events before the Crash and Bash Ladies could run their Victorian title, earlier Lenny Bates won the Street Stock Rumble through the dog leg course defeating Shane Roycroft and Andrew Burgoyne.

The Ladies Crash and Bash were the co-main events of the day and the qualifying racing was as expected hard fought with the states toughest female race drivers crashing into each other and shunting each other out of the way to get to the finish line first. 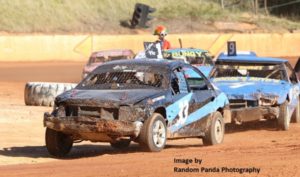 Belinda McCoubrie won the first qualifier comfortably ahead of the defending Victorian champion Danielle O’Brien before doubling up to win the second qualifier also. Lea Judd then O’Brien won the final two with O’Brien’s consistency across her three qualifiers seeing her claim the pole position with McCoubrie alongside.

Unfortunately for the competitors and the spectators in the last race prior to the class getting to compete in their championship, a very bad racing accident resulted in seriously damaged cars to Victor Benson and Aaron Laidlaw in the Standard Saloon class and a competitor requiring medical and crash services support resulting in a visit to hospital. All this took a great deal of time as every precaution was met for the injured racers well-being.

The Ladies title race was postponed at that point and further information will be available via social media outlets once a decision has been reached. A side note is that the injured person was confirmed not to have serious injuries after hospital observation.

In Street Stock action, the drivers arrived at the track believing they would race on the full course speedway; however that changed when drivers voted to run through the dogleg giving the event something special and different to make it an event drivers might want to do next season from across Victoria.

Lenny Bates from Melbourne’s Eastern Suburbs won the first heat from Shane Roycroft and Dylan Campton and then had to settle for fourth in the second heat when Roycroft took the win from Morwell’s Daniel Stewart and Eugene Bennett from the South East of Melbourne. In the final qualifying race, Bates won again from Roycroft and Andrew Jordan before the drivers thrilled fans in their feature event.

Bates was challenged by Roycroft almost every time they exited the top of the dog leg to move back onto the speedway, however Bates had too much for Roycroft with Burgoyne securing third after a tussle with Bennett & Jordan. Bennett washed wide after doing all the hard work to pass Jordan and Burgoyne had already passed Jordan. Both Burgoyne and Jordan went through to finish third and fourth with Leigh Gooding in fifth.

In the Division 2 Hot Rod racing, Ricky Low won the final in front of Rob Tatterson, his daughter Mel then Peter Angus and Gav Summerill.

Trish Dike all day was the top driver in the Ladies Standard Saloon’s and she picked up the win in front of Ashlee Harris, Nicole Allman, Jemima Borkowski and Kate Stuchbery. 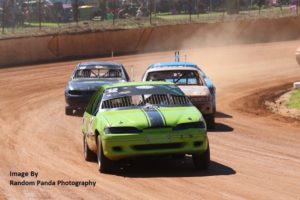 Junior Standard Saloon action was terrific with a strong field of racers entered. In the feature race Jack Yeomans, Deegan Benson and Lewis Williams were having a cracking race weaving in and out of the traffic before Benson made a mistake and ditched his car into the infield dirt losing too many places. At the end, Williams had an opportunity to take the win however, Yeomans passing move on a backmarker was successful and Williams opened a gap for Owen Cecil to move through into second. Harry Cecil finished fourth and Blake Smith in fifth.

A Ramp Race and the Vintage Super Modified and Classic Sprintcar demonstration events added extra entertainment to the day, Dan Carrigy in his Sprintcar impressive given the age of the car.