Saturday night December the 1st was Christmas Cup night at Alexandra Speedway with all club classes and the visiting Goulburn Ovens Sedans taking to the track to battle to take away the first place trophy in their categories and the Christmas Cup victory. 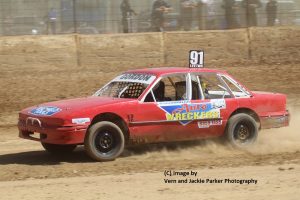 The Goulburn Ovens Sedans drivers drove down with most drivers from Wagga, Corowa and Leeton and a couple from North East Victoria. This event was an opportunity to warm up for the Victorian title for the class which will run in March.

In the end Mark Gordon from around Narrandera in Riverina NSW took the win from James Powell and Jamie Atkin. 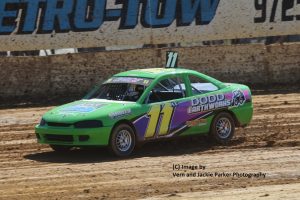 Chloe Sheerman a teenager from the Eastern Suburbs collected her second feature win this season when she was able to get the better of the All Star Junior Sedan field, Rhys Meakins and Bree Simpson completed the podium with all three rookie All Star starters this season having learnt in the New Star Juniors. ‘

Linken Paterson doubled up on his victory in the New Stars a fortnight ago when he led to the finish Luke Cornfoot and Jayden Bryant. Paterson is well on his way having only started competing last season.  Bryant a rookie this year looks like a future star of the class in only his second race meeting.

Aaron Meakins picked off Cory Horter in the Standard Saloon final after Horter looked as if he might just pull off an elusive feature race win, one that he is yet to achieve. Meakins, Horter and Liam Powell were the top three. 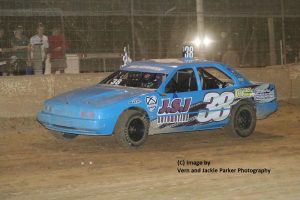 Tristan McGraw was able to defeat last meetings Victorian Speedway Council Junior Sedan winner Ally Morrison in the final with Rhys Lansdown finishing in third place. Earlier, Nick Cherry who looked fast made contact with the track entry gate wrecking his car and the gate after contact in a racing incident finished with him being knocked off his line.

The Sports Sedan final produced a great battle between one of the toughest in the class Luke Fallon and the newest in the class Ricky Cornwall. Cornwall briefly held the race lead before Fallon went on to assert his authority in the class to claim the win and give Cornwall ammunition for after Summer. Dale Smith finished in third place.

Alexandra Speedway has a summer break now to get past fire season and returns in March.